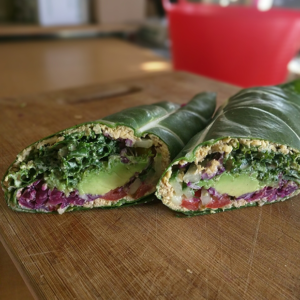 Both Caitie Reeg, Get Fit Clovis founder, and Diana Giraldo, Get Fit Clovis editor, were intrigued when they found out about Chef Naomi Hendrix and her Raw Fresno cuisine. In the past the review has been focused on a gym or a specific trainer, but seeing as diet is an integral part of anybody’s fitness journey they decided to try a few items on Raw Fresno’s menu.

What did Caitie think?

Caitie: Right away let’s just get it out there that this was one of my favorite reviews to do for Get Fit Clovis so far. We were very blessed to have reached out to Chef Naomi and get a quick and enthusiastic response.

She provided us with plenty of options to review and was available to answer any questions that came up, which means a lot since she is a very busy woman. Her Raw Fresno food truck keeps growing in popularity, while her restaurant, located inside Downtown Fresno’s Galleria, will be opening soon.

Among the food Raw Fresno delivered right to our office was a green smoothie, a kale caesar salad, a bean sprout salad, Caribbean tacos, and my personal favorite, the cheesecake. All of the food is served in perfectly portioned containers and includes a cute little label highlighting all of the nutritional information.

One of my favorites was the green smoothie. The base is made from the live Kefir water that Chef Naomi brews herself and then mixed with kale, parsley, celery, strawberries and banana. I enjoyed that the consistency was more liquid than viscous. I don’t like having to use a spoon to consume a smoothie. The healthy greens were cleverly disguised by a fruity flavor profile. This smoothie was both light and satisfying and would be the perfect complement to any pre or post workout ritual.

My absolute favorite was the happy tummy cheesecake. The first bite of the cheesecake dessert wasn’t very impressive. It was the hesitance of trying something new plus the expectation of a traditional cheesecake that made something taste off about it. But the next bite, and every bite after that was a delightful little mouthful.

The ingredients are organic sprouted cashews, kefir water, lemon juice, grade B pure maple syrup, pink Himalayan sea salt and Madagascar vanilla. The consistency, texture and color matched that of traditional cheesecake which was impressive, and once you realize that it’s both good and good for you it brings the taste to a higher level.

That can be said of all of Raw Fresno’s menu items. The fact that any of the food you order is so unbelievably healthy and will nourish your body to the point of spoiling you rotten is something that really kicks the taste up a notch.

I am looking forward to tasting, what Chef Naomi’s restaurant has to offer to all of us healthy eaters in the area, and attending the cooking class, which will be offered once a week on Fridays.

What did Diana think?

When it comes to food, I like to think of myself as the typical Californian.

I have an obsession with avocados – just like everyone else in the Golden State. I’m always willing to try new and healthy foods, but I also love my In-N-Out.

When Chef Naomi Hendrix talked to me about her restaurant I was curious, but to me, eating raw food was definitely different than what I am used to. Then she said something that stuck with me, the problem with some healthy foods and why people don’t like it, is because it’s too bland – you have to have fun with food.

When Naomi’s creations were presented to me the color and the presentation grabbed my attention. The Farmers Market Wrap was vivid with color and I was always taught to eat all the colors of the rainbow – so I knew we were on the right track. I was also given the Stuffed Marinated Mushrooms, Strawberry Chia Pudding and Key Lime Pie.

Now it was my first time eating fully-raw cuisine, so I was a little intimidated. I decided to start on the safe side and began with the wrap. As soon as I took the first bite I knew this was something I could eat every day for lunch. (I wish I could start writing in emojis because it was just “yummm.”)

I’ve tried wraps before and for me they have been very hit and miss but this one had the perfect combination of flavors, of consistency and best of all it didn’t fall apart when I was eating it. When I finished the first part of the wrap I looked at the plastic container happily because there was still the other half waiting for me to indulge.

As my tastebuds continued their exploration, I decided to go to take a leap and try the Stuffed Marinated Mushrooms. Since I was a young girl my father taught me to love mushrooms, so after having such a delicious experience with the wrap I new they were going to be good – and I was right they were. The texture of the mushrooms and their filling were delicious.

Then I started noticing – to my eyes, it may have not seemed like a lot of food but I was starting to get full. Oh no, I still had to save room for dessert and I didn’t have one but two. I went with the Key Lime Pie first. Being someone who has a relentless sweet tooth I was excited for this one. It was perfect, and thick just like a normal pie. How does she do it? Oh and since it was a raw pie there was no guilt to feel. How great is that!

On to the last, probably my second favorite – the strawberry chia pudding. The flavors, like in the other plates, were in perfect cohesion. I could taste the freshness of the strawberries and the sweetness of the dessert was just right. I’ve always liked to add chia seeds to my smoothies so having in a pudding is definitely something I want to have again.

Although my tastebuds were having a hard time believing everything I was eating was good for me, my brain was at ease because I knew all the ingredients my samples were made of were fresh and were good for my body. Many people say it is hard eating healthy because they always feel hungry – not if they were to eat Chef Naomi’s food. I was full.

Next time I’m on my way to In-N-Out I will think twice because I could get a wrap for just a couple dollars more.

Break it Down: Dr. Joe Martin of Doc’s Gym