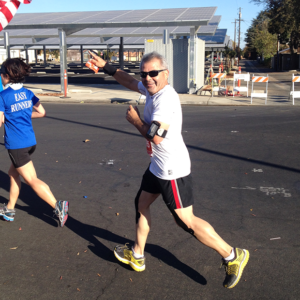 Don Valenzuela and his dog Jake begin most days with a morning jog. As Valenzuela wakes up at 5 a.m. and straps on his running shoes, Jake instinctively gets up and walks to the door.

It’s this routine that helps Valenzuela clear his mind as he prepares for a busy day which includes working on cars and paintings.

“My body is used to waking up during the week early every day. Even on Saturday, I don’t feel like sleeping in,” Valenzuela said. “There’s always something that needs to be done.”

For this 55-year-old fitness guru, artist and auto body shop owner, time is too precious. So he saves time by running with his dog instead of people.

“Running with people just doesn’t work for me because there’s only 24 hours in a day,” Valenzuela said. “If we’re supposed to meet at 5 and they’re not there until 5:20 that doesn’t work.”

As he runs with his dog, Valenzuela plans out the daily schedule for Don Valenzuela’s Autobody Shop in Clovis.

“It really helps me focus on things that need to take place for the day. In this business, no day is the same,” he said.

By the time he arrives at work, Valenzuela’s wife Rosanne is at the front desk taking care of the bookkeeping for their business. Valenzuela then gathers his employees for a quick meeting before everybody gets to work.

No matter how much they plan, however, Valenzuela and his crew always expect the unexpected.

“We deal with wrecked cars, but we can only plan so much because there are things that happen during the day,” Valenzuela said. “We might get a phone call saying, ‘I just got in a car accident, can I have my car towed to your shop?’ We make adjustments to help our customers.”

In his office and in various corners of the shop, Valenzuela’s paintings hang from the walls. One of his most recent masterpiece is an illustration of the iconic football play known as “The Catch.” The painting depicts the famous Sports Illustrated photo, in which 49ers’ receiver Dwight Clark makes a catch over Dallas’ defensive back Everson Walls in the 1982 NFC Championship game.

“Once I start an art piece, I don’t rest until it’s completed,” Valenzuela said. “It’s exciting to see it come from a blank piece of metal and progress.”

This same type of determination has helped Valenzuela as he trained for four marathons. Three of those marathons he was able to complete. In his third marathon, however, he pulled out with a hamstring injury.

For Valenzuela, running started when he first found somebody who doubted him.

“I ran that marathon because somebody told me I couldn’t do it. I fell in love with it,” he said.

Since then, he has done what many people have failed to do.

“Very few people go back and run a second marathon,” Valenzuela said. “They’re like ‘OK I’ve done it. I got it off my bucket list.”

Valenzuela said he has made many memories from his years of running. But there’s one story that especially stands out for him.

“The first time I ran a marathon, I thought I lost my toe nail,” he said. “I had a customer come in that week and said ‘make sure you wrap your toenails. My husband ran a marathon last year and he didn’t tape his toenails and he lost them.’”

At mile 21 of that first marathon, Valenzuela remembered the customer’s advice.

“I was dehydrated and I started hallucinating,” he said. “I thought my toes came off. It was a little blister, but in my mind I thought I lost my toenails.”

With injuries and age catching up, running has become harder for Valenzuela. Still, he is determined to keep going. This past November, he managed to push through the pain as he completed a half marathon.

“I would still be doing marathons if my body can hold up, but the doctor doesn’t recommend it,” Valenzuela said.  “I’ve always enjoyed exercise. It does many things for us. It sets the tone for the rest of the day.”

Keeping kids active during the summer

Waiting for the first snow fall