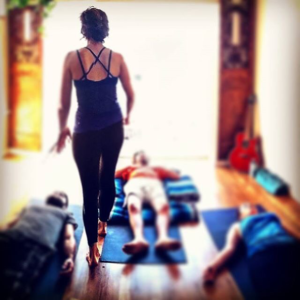 The flute has always been at the center of Christa Evans’ life.

As a professional, she has channeled her love for music into another amore, one which keeps her in tune with herself.

Christa was raised in Fresno before moving east to attend Northwestern University, where she studied to be a professional musician, focusing on the flute. She then went on to pursue a graduate program at Princeton University where she earned her doctorate in music history, studying ancient historic flutes.

Due to the demanding coursework and final papers, Evans looked for a way to relieve stress. She found what she was looking for when she opened herself to the world of yoga.

Evans recalls a time when yoga was not as popular as it is now.

“It just has this reputation – you have to be flexible and you have to look a certain way,” said Evans. “I was very weary of yoga. I’m not flexible at all and it was recommended to me to, kind of, build up strength.”

She recalls being eager to go to classes at first but then ceased to show up. Ultimately, Evans push herself to attend classes and found all she needed was a little push from someone else.

The yoga instructor she had at the time was what made yoga classes fun for Evans and motivated her to stay in tune with yoga.

Of course, she admits, at the beginning yoga it can be a little difficult to get the hang of.

“I feel like most of yoga is practicing being uncomfortable, really putting yourself into a state that is hard or challenging,” said Evans. “But it’s also a way to self-heal, and know yourself, and have a happier life off the matt.”

Evans said yoga offers many health benefits, but she is now more concentrated on Yin Yoga, which deals more with the practice of the mind.

“Of course it benefits your physical health,” Evans said. “But I feel like this mind, body connection and soul, spiritual connection kind of crack you open. I don’t know how else to put it.”

Evans said she loves teaching yoga. Her goal is to help build the yoga community in Fresno because it can be “quite a transformative experience.”

“I like to think that we’re like radios tuning into each other,” Evans said. “I think we must practice tuning into ourselves, which then allows us to feel better off the matt.”

Evans now teaches at Fulton Yoga Collective on Wednesday nights, where she makes sure everyone is having a fun time. The studio, she said, is a place run by special people who really care about the community.

When Evans isn’t teaching yoga, she is playing flute with her band ‘Maha Shakti’ who she performs with Thursday nights at Art Hop in Downtown Fresno.

She has learned to be in tune with, not only her music, but her inner self, and in the end that is what yoga is all about.

“You get on that matt, and it’s the time to really listen to yourself,” said Evans.

The climb to the top: The MetalMark Climbing & Fitness review