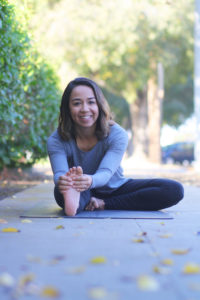 It’s never too late to start something new and for Desiree Heckman, owner of Old Town Yoga, it certainly paid off.

Heckman, a Fresno State graduate with a Master’s degree in counseling, was a college advisor before taking some time off to spend with her children.

She said she was never the athletic type, never did gymnastics, and was no success at all the sports she tried out for in high school.

“My whole family is super athletic and It’s kind of like a running joke about how uncoordinated I am,” said Heckman. “How I was just not flexible, and I can’t just do things that require a lot of movement, and so I was like, ‘You know what? Forget that. I’m going to start exercising, and I started running but then I started doing yoga at home.’”

Heckman fell in love with yoga, and just couldn’t stay away. She started teaching free yoga classes at the park, she held private yoga classes to business employees, and even had a short stint teaching at GB3 before deciding it was time to start looking for a place solely dedicated to yoga.

Her husband Andy, a talented artist, helped create the graphic art for the logo, the business cards, and all the renovations needed to make the place become a yoga studio.

“It seemed like both of our talents came together to create this amazing project, it was the biggest DIY project and we were on a tight budget, but we didn’t have to take out a loan or anything like that,” said Heckman.

After advertising and promoting her business on social media, Heckman bonded with fellow yoga instructor Crystal Uyeno, and together they began to teach classes throughout the week.

Heckman has been so busy since the opening in December that she has had to look to hire new yoga instructors for the coming month.

“People are coming to the classes, and coming back and bringing their friends,” she said. “It almost makes me want to cry because I started this and people are benefitting from this, and it’s been so overwhelming.”

With the rapid-fire success Heckman has been having, she hopes people continue to come and participate in her classes, and make Old Town Yoga a place where anybody can come in and feel welcomed.

“We kind of named it Old Town Yoga because we said this is kind of like Clovis’ studio,” she added. “Anybody – doesn’t matter if you’ve never done yoga or if you’re the most advanced yogi on earth – can come in and can take any class.”

Old Town Yoga is located at 325 Clovis Ave. on the southeast corner of Clovis Avenue and Third Street. For more information about classes offered, you can visit Old Town Yoga’s website at www.oldtownyogastudio.com

Get Fit Clovis gets dizzy feet