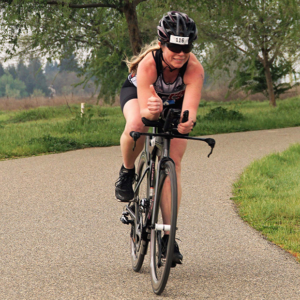 One of the duathletes giving the thumbs-up as she rounds a corner of the bike route during the event. (Photo courrtesy of Jim Hawe)

Mountain bikers, cyclists, runners and walkers was all the eye could see during the Sierra Cascade Mutlisports Production at the annual Spring Fling Duathlon held at Woodward Park.

The Spring Fling Duathlon was event two of a five event series going on through the Central Valley. The series started last month with the Valentine’s Day Run, also held at Woodward Park, and will conclude Sept. 30 in Shaver with the Shaver Lake Triathlon.

The event has been going on for over 18 years, and for the last three years Ray Keys-Bramlett and his family have coordinated it.

“All these events benefit the Activity Nut Foundation and Activity Nut puts together a local race calendar that has all the events that are going on,” Keys-Bramlett said. “We’re working on building a nationwide calendar that has all the events in the country so you can say ‘I’m going to Florida next week and I want to see what runs are available.’ Currently we have one of the most comprehensive lists in the Central Valley and you can find that at activitynut.me.”

The Duathlon event consists of a run-bike-run event with a road bike route or a mountain bike route available. There is also a 5K run and walk that you can register for in the event as well.

Ryan Brooks (road biker) and Chris Montross (mountain biker) were the unofficial winners of this years’ Duathlon. Brooks, a Clovis West graduate, had a record pace going after the first run segment in his first race back after some time off.

“This is my first time doing the Spring Fling Duathlon, I have done a couple of Duathlons but that was like five years ago or so, so this is my first in a while,” Brooks said. “I used to be a cyclist for five years, but then I got back into running and I’m starting to enjoy it more. I coach with Clovis West High School and their track program so that’s really my running training so in between I was like why not give this a try.”

Montross was a returning competitor to the competition and was last years’ U.S. Champion for his age division in triathlons.

“I feel great, when the alarm went off this morning I wasn’t ready to get up, but once I get moving and a couple cups of coffee and get out here it’s great, I love seeing everybody,” Montross said. “I swim, bike, and run all the time and so when we get to get out and do this in our backyard it’s kind of nice.”

Montross is signed up to compete in all 5 of the events put on by Sierra Cascade Multisports this year.

The next event in the series is the Millerton Lake Triathlon, which will take place Apr. 8. You can find information on the series and each event as well as register for the remaining events at sierracascades.com.